WSJ Article Warns May Be Weak Spring for Home Sales

WSJ Article Warns May Be Weak Spring for Home Sales

A March 7 WSJ online article (appearing in the print edition on March 8) claims “this could be one of the weakest spring selling seasons in recent years”.  Why?  Rising mortgage rates, the tax bill’s changes to incentives for home ownership, and rising prices sidelining more buyers.  The author also cited comments from Lawrence Yun, chief economist of the National Association of Realtors, who expects sales to be flat this year due to inventory shortages and eroding affordability.

It is, of course, important to remember that such discussions are an attempt to describe the US real estate market overall.  But as the saying goes… real estate is local.  To illustrate how different the expectations can be for the country as a whole vs. a particular market, specifically Austin, here are some comments from Mark Sprague (a market analyst and economist for Independence Title) in his recent update:

“60 to 90 days ago based on forecast and historical models, locally and regionally it appeared that 2018 would be more of 2017.  Maybe a little better, maybe a little slower.  However, the last 60 days have changed that outlook, with residential and commercial sales about double of last year at this time.  If we forecast off of this year’s start, forgoing any economic catastrophes, 2018 could be a record year.  The biggest challenge being lack of inventory.”

“For those waiting for values / rates to slow or change route, based on what we are seeing in all channels ‘the house you look at today will be gone tomorrow’.  It definitely will be more expensive…. Based on prior experience, if rates continue to hover between 3.5 and 4.5 percent and inflation remains low, expect originations, home sales and housing starts to each increase by 5-10 percent in 2018.”

Underpinning the strong performance in Central Texas, even while the country as a whole is expected to be fairly flat, is the fact that Austin continues to generate a lot of jobs.  At the Home Builder’s Association of Greater Austin 2018 Housing Forecast conference, Eldon Rude of 360 Real Estate Analytics showed a compelling graphic highlighting this: 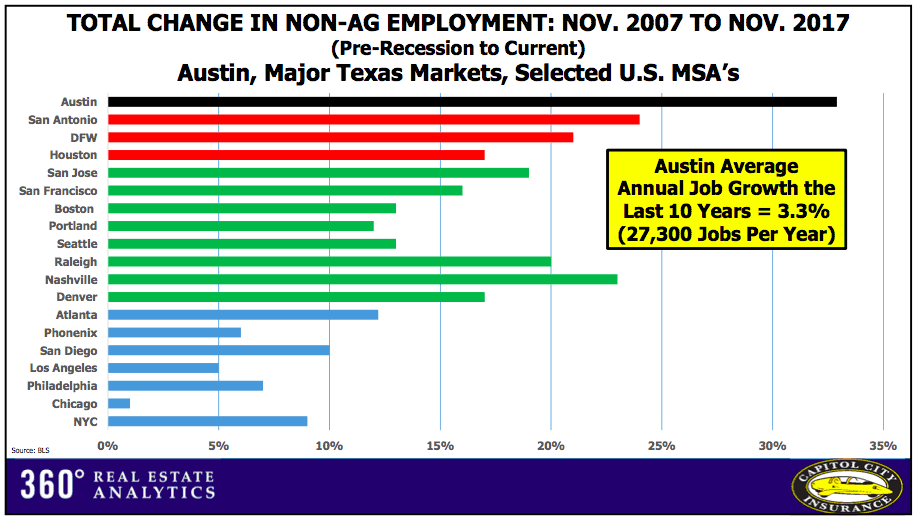 Austin has been better at generating jobs than other major cities in the US.  Jobs support prices and attract more job-seekers from outside of Austin, leading to increasing demand for homes.  So I think that the primary challenge for the Austin market in 2018 will be the matter of inventory.  The market can’t grow if there are fewer homes to purchase.  And that will also compound affordability issues as demand outstripping supply leads to rising prices.

See my post on the Tarrytown market in Central Austin, which offers some supporting evidence to the above comments from Mr. Sprague: February was the biggest since 2012, despite inventory at the lowest levels in the last 14 years!