I’m really excited about the plans for improvements to The Contemporary’s Laguna Gloria site.  The groundbreaking for Phase I occurred this past Wednesday (3/21) and included remarks from Louis Grachos, Executive Director and CEO of The Contemporary Austin, as well as Mayor Adler and Ross R. Moody, Trustee of the Moody Foundation. 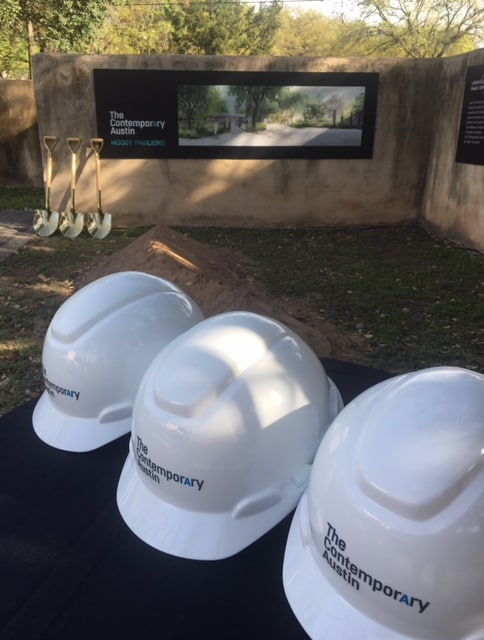 Phase I, named the Moody Pavillions, will include an arrival garden, retail space, outdoor café, and extended canopies providing shaded areas for guests. The new entrance will also incorporate works of art into the streetscape along West 35th Street, including a colorful sculptural installation by artist Jessica Stockholder.

The home at Laguna Gloria was completed in 1916 for Hal Sevier, editor of the Austin Statesmen, and his new wife Clara Driscoll.  It was inspired by the estates on Lake Como in Italy, where they had honeymooned.  Later, the property was donated to the city and became the original location of the Austin Museum of Art.

Today, the site contains the art school, and the home (the Driscoll Villa) which was renovated in 2003, now functions as an exhibition space.  The grounds are a beautiful lakeside setting for events and weddings and nature walks, and is set to become an even more attractive destination with these planned improvements.  This is such an asset to the city in general, but in particular a treasure to the surrounding neighborhoods of Tarrytown and Highland Park West / Balcones Area.

I highly recommend visiting, and supporting their efforts to improve it.  Link here to their events calendar and I’m sure you will find something fun to do or interesting to see.  And there are easy ways to support Laguna Gloria’s beautification efforts by donating to their tree fund or by joining.

The Settlement Home for Children provides 24-hourcare to help children in foster care access the materials and support they need torestore and preserve a permanent sense of well-being. Since they work with a wide range of ages, there are many ways to support this organization! www.settlementhome.org/spread-the-joy/If you have volunteer questions contactngavrelos@settlementhome.org.......@settlementhome @morelandproperties #atxgiving #austingiving #volunteer #treymcwhorteratx #austinliving #settlementhomeforchildren ... See MoreSee Less